Keep Your Money, He is After Your CHANGE 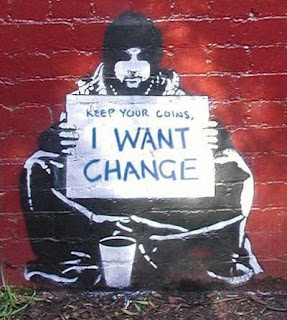 "He Doesn't Want Your Money, He is Interested In CHANGE"

"This is my renaissance (rebirth)


This is my one response
But I got to say now,
It's got to CHANGE"

Before I became a believer myself I always thought it strange that so many people "heard the call" and "said the prayer" at these "mass birthings", "revivals", and youth conferences, and then right back to doing exactly what they were doing before. I shouldn't have been surprised, I was baptized in water when I was 8, and again a few years later. I had made a public confession and said the sinner's prayer out of a honest terror of going to hell (yes, the local Baptist Church was the only Church I knew of, and Baptists sell Fire Insurance in addition to their regular day job). They also do a lot to help people in need, such as myself when I was 14 and didn't know where my shoes for winter were coming from, or my next meal.
Aside from saying the prayer, getting dunked in the water, and having an honest fear of my fire insurance policy not being any good because I never did my part in making the payments (a changed life), and reading the Bible cover to cover, I never really CHANGED.

I had a deposit, a drop of the Spirit, that provided enough light to keep me from walking off a cliff, but not enough to keep me from losing my way for the most part, from going down the dead ends and hitting all the potholes on the road to the Wedding Feast. Sure, somewhere deep I also felt some conviction, but it was rationalized away. It wasn't enough for me to turn around (repent), just enough to make me search the Bible for more loopholes.

The scariest part the whole time was the very word's of Yeshua (called Jesus by most Christians) "Away from me your workers of Lawlessness, for I never knew you!" These words were being spoken to those who had performed miracles, healed the sick, raised the dead, founded television ministries, sold books, etc, etc. Of course, as one of the 12 Apostles, Judas had done all of these things as well. I knew that if they were in trouble, I must really be in deep. I didn't even tithe, and like the sign above says, He isn't interested in your coins, He wants REAL Change.

Another thing that will keep you up at night, the words found in the Gospel of John "He who loves Me will keep My Commandments", and we are also warned that if we don't do as the Father Commands, then the Father is not in us. I was also at this time, well aware of the many Commands being ignored by many Christians. While they found breaking the Sabbath, celebrating pagan holidays, and other things perfectly okay scriptural because their pastor said it was, I had a curse of knowledge. I knew that it was wrong, but I did it anyway. At least they could do as they wished on Sabbath out of ignorance and could probably be forgiven, they didn't know any better. When you know better, and do it anyway, then its Grace Abuse and comes to the point that no forgiveness remains.

Like alot of other things. Studying the Scriptures to find loopholes had only revealed more ways that I was hanging myself. Studying the Scriptures to prove Deism (an Elohim that doesn't personally involve Himself in the lives of people) only proved that He was very involved, especially in the business of blessing and cursing. Especially in the business of taking care of hypocrites (my way around this was to simply not claim to be a Christian).

Finally I came to the admittance that Teshuvah (Hebrew for Repentance, returning to YHVH's Law) must be made. While asking forgiveness with your mouth is one thing, actually changing is a whole other thing entirely. Just as Yeshua says that if your brother offends you and REPENTS 70 times then you must forgive Him. The word He uses for REPENT isn't talking about a verbal "I'm Sorry" its talking about actual change. I realized that Accident Forgiveness is granted not when we quote our life insurance policy number (an out of context verse) to heaven's prayer line, but we actually REPENT and change our ways to match YHVH's Ways and start driving the vehicle of life like we care if we wreck, which hurts us and others, and is an offense to the one who paid for the damages the last time. If we can't handle our earthly clunkers, what kind of vehicle can He trust us with in heaven, the kind we will have for Eternity (Matthew 5:17-19).

The difference between Fire Insurance and Blessed Assurance is seen in the 2 words for "To Hear". In Greek, Akousia (like Acoustic) means to physically hear when sounds waves hit your ear. In Hebrew, the language Jesus spoke, they say "SHEMA". Shema means to "hear and obey", because Hearing YHVH without obeying Him is almost inconceivable. If you heard and didn't obey, then you must not have known the voice of the one who was speaking (Just like Paul's Companions who heard thunder). The "Shema" is also a prayer found in Deuteronomy 6, that declares that there is only one YHVH, and He is above all, so we must Hear and Obey Him. Yeshua also quotes it as the Greatest Commandment "Hear O Israel, HaAdonai is Elphim, Adonai is ONE."

I challenge you to hear (Shema), YHVH's Words in the Bible, obey His Commands so that you may blessed if you are a believer and not have your rewards lessened in heaven (Deuteronomy 30, Matthew 5:17-19) and not bring a curse on the nation such as more terrorism and debt ( Leviticus 26)

We can give to the Congregation, and go through the motions, appearing to be changed, but unless our heart is changed, then our "Fire Insurance' is not yet in effect and everything can still burn.

Its not our COINS He seeks, He seeks CHANGE. Giving the Coins simply Changes us, because it breaks our attachment to that which is not YHVH, but is only treated as such. The blessing comes not from giving our "love offering" but in giving an offering of Love, expressed by change, a broken and contrite heart.

"Renaissance" by Mat Kearney (Nothing Left to Lose) http://www.youtube.com/watch?v=rN4Fw44R5aE&feature=related 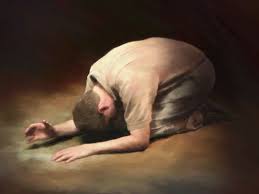 The Bowing of Wheat We are all familiar with the parable of the wheat and the tares, but few understand the difference between wheat and tares.  When wheat is fully mature, when wheat becomes fruitful, it bows its head from the weight. It reproduces after its kind, bread of life. The wheat bows its head down in the presence of the one with heaven's sickle having come to harvest His own from  the earth. When a tare is fully grown, it refuses to bow its head. The tare may reproduce after its kind, but its not fruitful, in fact, everything it produces is choking out life. After I posted this note, a fb friend left this comment about physical wheat and tares as well:"Greek "Zizanion" literally means 'anti-wheat', In the Hebrew "Zownin" means "nausea." It is not a type of vetch, but a darnel; it is impossible to distinguish from the wheat, until the wheat's ear is fully developed, then the thin fruitless ear of the darnel is detected
Read more

Her Name was Sacred, Did You Know Her?

Her  Name Was “Sacred” Did You Know Her?      Have you ever had the unshakeable feeling when you look around you that this Country has lost something special but you couldn’t quite put your finger on what it was? I have been struggling with that feeling of loss for many years now, every time I leave my front door it haunts me, every time I turn the dial of my radio or my television, every time I log on to Facebook I notice it’s glaring absence but the world goes by as if nothing had occurred that was noteworthy. What we have lost was once so familiar, such a comfort, such a daily reassurance that no matter what happens we would all be okay, that we took it for granted and we lost it like losing a loving grandmother. But some of us, some of us that knew it intimately, didn’t lose her like the grandchild who had only a fading memory. We lost her like the grandfather whose hand she had held her hand through good times and bad times, through poverty and prosperity, through wartime and
Read more

What's A Boy To Do? With No Man In His Heart 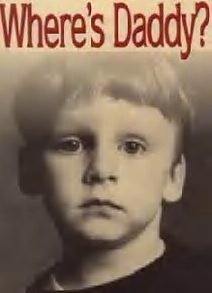 What's A Boy To Do, With No Man In His Heart?  One of my favorite authors and the man who inspired me to be a Christian Counselor (and become a Christian) John Eldredge (who wrote "Wild at Heart"), has done a lot of work with men who never knew their fathers as boys, or whose fathers were unable or unwilling to initiate them into manhood. Either their fathers were physically absent or simply emotionally absent. In either case, the boys simply  were never initiated into manhood by a secure attachment to another male figure. This often results in men unable to pursue and share in intimate relationships with their wives or any person for that matter. The lack of attachment to, and the lack of initiation into manhood by, a strong and good male figure opens the door for seeking false attachment and confidence through pornography or cheap sexual encounters in place of real intimacy a spouse, or even to homosexual relationships in order to find that attachment to a male
Read more